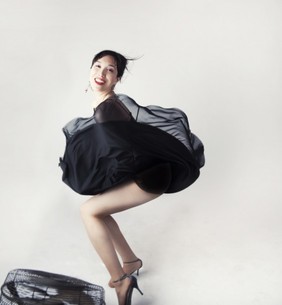 Cinematographer, Musician, Art Designer and International Event and Art Marketer, this Canadian born multifaceted artist graduated with honors in 2010 from the Department of Marketing and Film Animation at Concordia University. She recently completed her MSC in International Marketing with Tourism and Event Management at Edinburgh Napier University in 2011.

Over three years she held the position as Montreal Marketing Representative ~ Account Manager for several reputable film companies such as Paramount Pictures, Disney and Warner Brothers and was responsible for building, executing and delivering catchy marketing campaigns for these clients.

She is currently a featured writer and blogger for Mountain Lake PBS . Her self-created blog, entitled Gen's Delights, highlights the latest in food, culture and entertainment around Montreal .


An accomplished violinist and singer, Genevieve is the recipient of two gold medals from Vincent D' Indy's school of music end of year competition and has equally won gold at the Vallée-des-Champs, Classical Music Competition.

She has recently been invited to join the soul - rock band Von Dalia as a violinist and back vocalist. The group has recently performed at Club Soda on May 4th 2013 at and will be performing at Olympia on June 16th 2013.

Her professional work in film includes directing several of her own animated shorts. In 2009 she acted as graphic prop designer on Quebec filmmaker Jim Donovan’s feature film 3 Seasons . She also worked as head costume designer on the pilot of Jason Gondziola’s television series Process. In 2010 she was co-art director, costume designer and principal actress in Dominic Poliquin’s short film Motoko Yamaska.

Holding a passion for tango dancing, Genevieve’s work in theater and dance includes being the choreographer  and principal dancer in her own piece: Tech Amok at Dawson College.  She also played the role of God / Narrator in the piece Starting Somewhere at Mc Gill University and was set designer for the play RJQ at Concordia University in 2009.  She held the leading role as Dee in the play I Am Yours by Judith Thompson. (Concordia University Theater department 2007). Passionate about her own Asian heritage, she used her experience in arts and marketing to introduce Joel Mason’s new musical:  Mary of the High Seas to Asia in 2012.

In addition to her work in theater and  film, she has worked as a volunteer and public relations officer for several film and art festivals such as the Ottawa Animation Festival, Toronto's Anime North Convention and the Fantasia Film Festival in Montreal.